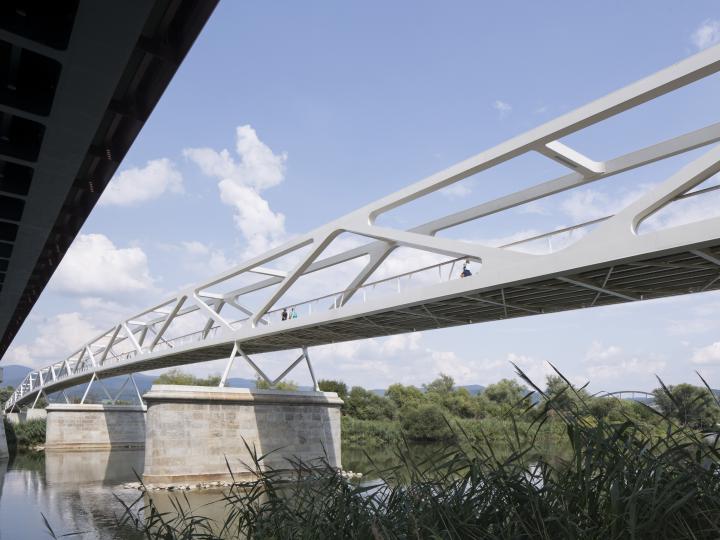 For the first time, the award goes to a rehabilitation and modernization project

The winners of the 2016 German Bridge Engineering Award are the Kocher Valley Bridge (Kochertalbrücke) on interstate A6 at Geislingen (repair and strengthening) and the Danube River Bridge (Donausteg) in Deggendorf  (new construction), in the categories "Road and Railway Bridges" and “Pedestrian and Bicycle Bridges” respectively. Ralf Bothner, with the design firm Leonhardt, Andrä and Partner Consulting Engineers VBI AG, Stuttgart (Kochertalbrücke) and Hubert Busler, with the firm Mayr Ludescher Partner Consulting Engineers, Munich (planning group Donausteg) were honored as the leading engineers in such projects.

The upgrading of the Kocher Valley Bridge (Kochertalbrücke) has received the 2016 German Bridge Engineering Award because it showed that the service life of existing structures could be sustainably extended through well-thought and creative engineering.  The rehabilitation of this German art of engineering icon not only eliminates the traces of 35 years of traffic, but also improves the stability and durability of the bridge beyond its original condition. Therefore, according to the jury, the successful strengthening of this structure is a groundbreaking achievement that can lead the way for upcoming tasks in bridge construction.

By awarding the prize to the Danube River Bridge, a pedestrian and bicycle structure more than
450 m in length, across the two Danube channels near Deggendorf, the jury is recognizing a seemingly floating, filigree steel truss structure, that provides a successful contrast to the adjacent railway bridge. The exciting design creates a valuable experience for both users and spectators.  In addition, the jury recognizes the bold implementation of a semi-integral method of construction, which leads to a low-maintenance structure, and it also recognizes the remarkable quality of all bridge details.

This year, for the first time ever, the jury presided by Prof. Dr.-Ing. Manfred Curbach, TU Dresden, is granting the award to a rehabilitation project; the Kocher Valley Bridge. With this decision, the judges praised this special engineering achievement, as well as other similar bridge modernization projects. Since such a bridge upgrading work must meet specific functional and aesthetic requirements, the underlying planning and design belong to the most demanding engineering tasks. Therefore, the VBI and the Federal Chamber of Engineers are explicitly pleased with the current jury decision. Given the large demand for rehabilitation and preservation of existing bridges in Germany, such projects have been allowed, from the beginning, to enter the competition for the German Bridge Engineering Award.

Since 2006, the prize is awarded every two years within the two competition categories "Road and Railway Bridges" and “Pedestrian and Bicycle Bridges”. Besides the structure itself, the engineers, whose intellectual and creative performances were essential for the success of the awarded structure, are presented with an award sculpture.

In addition to the award-winning Kocher Valley Bridge and Deggendorf Danube River Bridge, the jury had nominated the following projects in the category "Road and Railway Bridges":  the Grubental Bridge near Goldisthal, in the Thuringian Forest, and the strengthening of the historic Rendsburg Railway Bridge. In the category “Pedestrian and Bicycle Bridges”, the Leibniz Bridge across the Finow Canal in Eberswalde, Brandenburg, and the new Campus Bridge in Wuerzburg had been nominated.

The Federal Department of Transportation and Digital Infrastructure, as the sponsor, is fostering the German Bridge Engineering Award. A main sponsor is the Deutsche Bahn AG (German Rail Service).

Further information, images of the award-winning structures as well as short-profile video clips of all six nominated bridges can be found on the Internet at: www.brueckenpreis.de